George Lopez (born April 23, 1961) is a successful actor and is mostly known for his appearence in the main character in his own hit sitcom series, ABC-TV's George Lopez fron 2002-07. He was the host of the TBS network talk show Lopez Tonight from 2009 to 2011.

George Lopez was born in Mission Hills, California. He was deserted by his father at birth, but was raised by his maternal grandmother, Benita Gutierrez, a factory worker, and step-grandfather Refugio Gutierrez, a construction worker.[3][4] Lopez described his grandparents as abusive and specifically recalled his grandmother as a bitter racist who had nothing positive to say. In 1993, Lopez married Ann Serrano. The couple has one child together, Mayan Lopez (who made a guest appearance in the Season 6 episode "George Rocks to the Max and Gets Diss-Band-ed" (episode #13)).

A DNA test read by Mariah Carey on Lopez Tonight revealed Lopez to be of 55% European, 32% Native American, 9% East Asian, and 4% African descent.[5]

Lopez has a genetic condition that caused his kidneys to deteriorate. His doctors had told him in April 2004 that he was going to require an organ transplant but he postponed the operation until after finishing the 4th season of George Lopez so as not to hurt the 170 people who worked on his show. In 2005, his wife Ann donated one of her kidneys to Lopez. The transplant was successful; Lopez lost 45 lbs. after the operation due in part to having his health so vastly improved. He brought awareness to the issue on his show; his son, Max, was diagnosed with a similar illness.

Lopez was a featured celebrity golfer in The 2004 Bob Hope Chrysler Classic and the 2004 AT&T Pebble Beach Pro-Am. Lopez and his pro partner finished third in the Pebble Beach event. George was the top ranking celebrity at completion of the golf tournament. Since 2006, Lopez has served as the host of the Bob Hope Chrysler Classic. He is a member at Lakeside Country Club in Burbank, California and has a 13 handicap.[citation needed]

A native of Los Angeles who grew up in San Fernando Valley’s Mission Hills, Lopez devotes much time to the community. He has his own charity: The Ann & George Lopez Foundation (www.thelopezfoundation.org). He has received the Manny Mota Foundation Community Spirit Award and was named Honorary Mayor of Los Angeles for his extensive fund-raising efforts benefiting earthquake victims in El Salvador and Guatemala. In February 2004, George was presented the 2004 Artist of the Year and Humanitarian Award by Harvard University, presented by its president and dean for his artistic work and charitable endeavors.[6]

Lopez has received several honors for his work and contributions to the Latino community. In September 2004, George was honored with the "Spirit of Liberty Award" presented by People for the American Way. In August 2005, Time magazine recognized George as one of "The 25 Most Influential Hispanics In America".[7]

In an appearance on The Tonight Show with Jay Leno Lopez mentioned that he is an avid golfer. When asked why golf was a favored pastime, Lopez responded "Any chance I can get to hit something that's white." 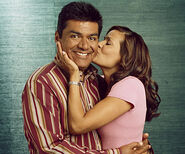 Add a photo to this gallery

Retrieved from "https://georgelopez.fandom.com/wiki/George_Lopez_(Actor)?oldid=11451"
Community content is available under CC-BY-SA unless otherwise noted.